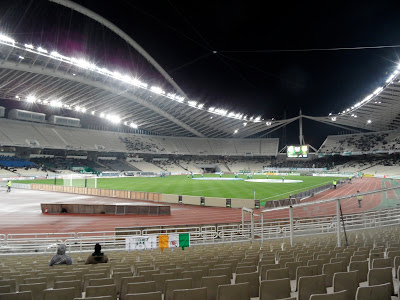 It seems oddly appropriate that, after asserting the sports-like popularity of shopping in Athens, I write about my experience of watching a football game in Athens.

In case you don't already know, football (our soccer) is wildly, insanely, cultishly popular in most of Europe, and Greece is no exception.  There are several main teams in Greece that each have a regional loyalty; the Athens team is Panathinaikos, and it's colors are kelly green and white.  So, I donned the only green piece of clothing that I have with me in Greece (a scarf), and headed to to see my very first professional football game.

To give you an idea of my knowledge of the sport of football, let me just say that I have never attended an entire soccer game that I can recall.  I believe I sat through part of one in highschool.  I know that you can be yellow-carded or red-carded, and I remember something about the French player Zidane being thrown out of a World Cup game after a violent response to a player on the opposite team insulting his mother and sister.  So, it was an experience. 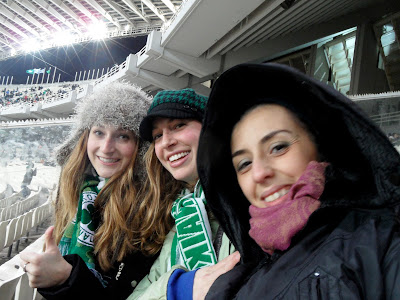 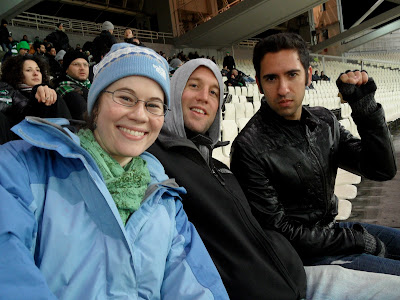 Six fellows elected to sit out in the ridiculously cold weather on Saturday night.  Aside from my scarf, I wore Cuddle Duds, my Northface fleece and windbreaker, a ski hat, fuzzy socks, jeans, boots, and a long-sleeved shirt.  It was REALLY cold, but we were excited as we arrived at the gorgeous Olympic Stadium not far from the school.  You can see the top of the stadium from many points in the city because of the height of the arches on top.


The stadium was practically empty (Panathinaikos was playing a notoriously easy team) except for the famous Gate 13 fans on the end.  Now, Gate 13 is the name of a Panathinaikos fan group, and is not actually located at Gate 13.  These super-fans were situated behind the home team's first-half goal (almost opposite our seats), and we had as much fun watching them as we did the game.  I had been prepped for the wild enthusiasm of football fans in Greece by a metro-ride one night before Christmas in which a group of teenage guys regaled the metro riders with a hearty rendition of the Panathinaikos song.  (At the time I could only guess what the enthusiasm was about; I later found the song on a blog I frequent about an American living in Greece.)  However, the first surprise came at the beginning of the game when the team walked out onto the field and we were startled by the booming of an unseen cannon.
Along with the team's song playing over the speakers and the wild cheers of the Gate 13 fans were fireworks.  These were not fireworks set off on the field a la the SuperBowl.  No, these fireworks were lit by the fans, in the stands, with no apparent concern for the fact that the sparklers and Roman candles could SET PEOPLE ON FIRE, not to mention the giant flags that they were waving in the same vicinity. 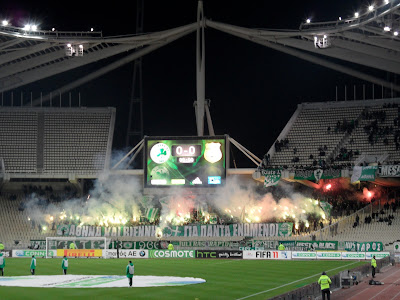 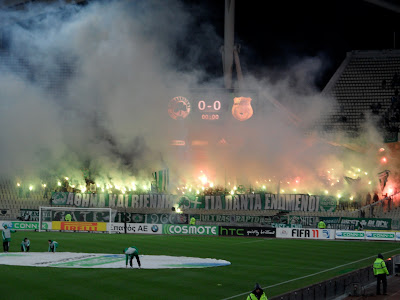 The riot police we saw troop in before the game were apparently not concerned with such minor occurences.  (Bottles, however, are not allowed in the stands.  Huh?)
The cannon continued to boom at random points throughout the game, and we were regaled with the team song, as well as various other songs insulting teams other than Panathinaikos.  Added to this was the liberal profanity in response to the officials' calls (and lack of calls). 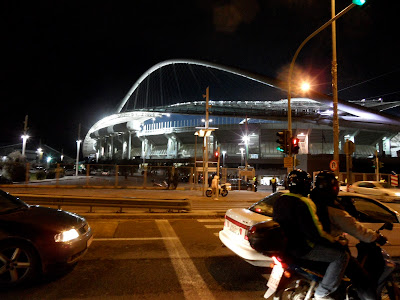 For a video of fans singing the Panathinaikos song (and an English translation), hit up the following article at the wonderful blog "Living, Working, Musing, & Misadventures in Greece": http://livingingreece.gr/2007/11/13/girl-of-the-greek-green-clover/.
Thanks to the above article "Girl of the Greek green clover" and Wikipedia's article "Gate 13" for my knowledge of Gate 13!

Meredith York
After four years of college and a year abroad, I've become another of the boomerang generation with a lot of free time. I have a wealth of information at my fingertips as a part-time librarian and free reign over a small portion of my suburban backyard. Organic gardening is my newest passion, and I'd like to share it with you.